Following are the Facts and Procedures for the Lasik Eye Surgery:-

What is Refractive Surgery?

Refractive surgeries are those that are performed to help an individual reduce their dependency on glasses. They may be laser or non-laser based surgeries.

What is LASIK and how does it work?

LASIK stands for Laser In-Situ Keratomileusis. This Lasik Eye Surgery involves the creation of a flap on the cornea of the eye, after which laser is used to ablate/burn tissue and mold its curvature such that it changes the focal point of the eye. A thin flap of required thickness is created using either a motorized blade (Microkeratome LASIK) or a specialized Laser (Femtosecond or Bladeless Lasik Eye Surgery). It is then washed and put back in place. No stitches are required. 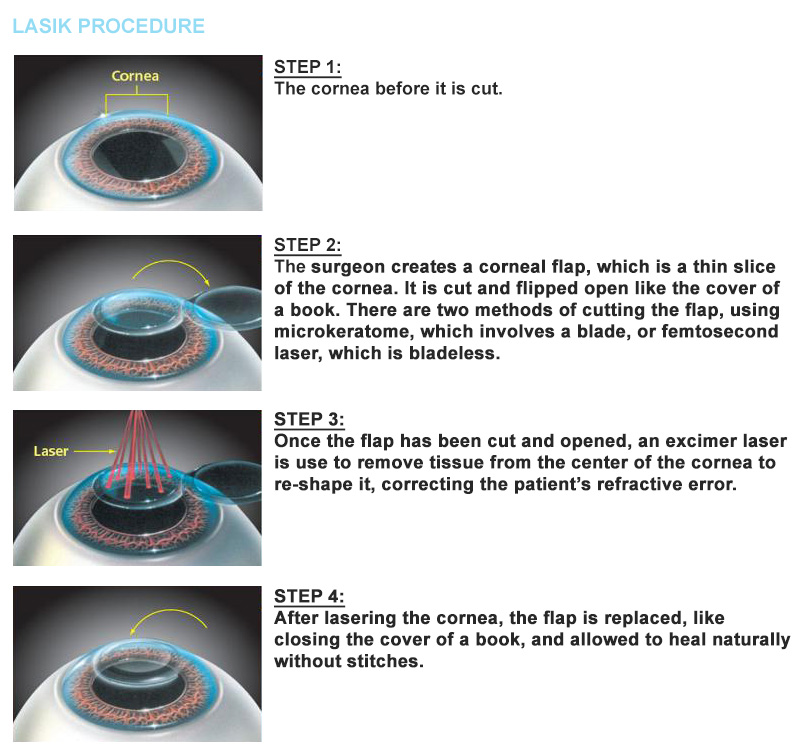 1-Will my number become zero after surgery?

LASIK is meant to reduce your dependency on glasses, but may not completely eliminate their need. The total number of the patient is fed into a highly precise computer technology but the healing of the human eye is unpredictable. A negligible residual number may persist but this doesn’t necessarily mean that the patient requires glasses. Often patients are eager to know whether their number after surgery is zero or not, and they overlook the fact that they have completely normal vision and are comfortable with the same.

2- Does the effect last forever?

LASIK is a laser done on the eye to reshape the cornea such that the number is minimized. However, it cannot halt your normal aging process. Presbyopia is a condition near around the age of 40 years when an individual starts developing a reading glass power. This is because of the effect of age-related changes in the eye. This effect begins around 40 years and progressively increases up to the age of 60 years. An individual who had no glasses for all his life may now require glasses for reading/ writing/ mobile phone use/ near work. LASIK cannot in any way halt this natural phenomenon, and so when the time comes, one will require reading glasses, though LASIK will still remain effective for their distance vision.

3- Will I develop Cataract after LASIK?

Cataract is an opacification of the normally clear lens. An age-related Cataract is an inevitable process and LASIK will have no bearing on it. Whenever you do require cataract surgery, the surgical procedure and options for the Intraocular Lens remain the same.

Traditionally, a bladeless/ blade-free LASIK is what is referred to as FEMTOSECOND LASIK.

This is a highly precise technology which may be of additional benefit in thinner corneas or those whose curvature is too flat or steep. Here, a Femtosecond laser is used to create the flap in the cornea. i.e. the first step differs in that instead of a motorized blade, a highly precise laser (of a different type from the one that removes the number) is used to create the flap. This is a true bladeless Lasik.

It is important to know that not everyone can undergo the LASIK procedure. The concerned person’s eye must be of a certain curvature and thickness to permit the surgery. Beyond permissible limits, the procedure may be harmful to your eye. E.g if the cornea is too thin/ too steep/ too flat or the spectacle power is very high.

The nonsurgical options like glasses or contact lenses are always there. Always remember that Lasik is a cosmetic procedure!!

For thinner corneas, a blade-free procedure called EPILASIK or PRK ( Photo Refractive Keratectomy) can be performed. In this procedure only the uppermost layer of the cornea i.e. the epithelium is removed instead of making a flap. Since lesser tissue is involved, it may be a better option for thinner corneas. Ultimately, the laser that removes the number is the same in both the procedures. (Only the first step differs.)

For corneas that are too thin or that have very high spectacle powers, a better option called ICL can be done. This is an Implantable Collamer Lens, similar to a thin contact lens of your eye power, but surgically inserted into your eye and it rests on the natural crystalline lens.

Dr. Kareeshma Wadia routinely performs all these procedures. Speak to her for more details on what is the best option for you.